Known as Sonora Sunset or Sonora Sunrise, the red-colored parts are cuprite and the blue/green area is chrysocolla. Cuprite is a secondary mineral which forms in the oxidized zone of copper sulfide deposits and copper ore bodies. This specimen is a new find in the Millpillas Mine, which opened in 2006, in Sonora, Mexico. Although most copper mines are open pit mines, this material is overlaid by 1000 feet of gravel. This specimen was donated by Barlow's Gems in 2010. Photo: Arnim Huber. 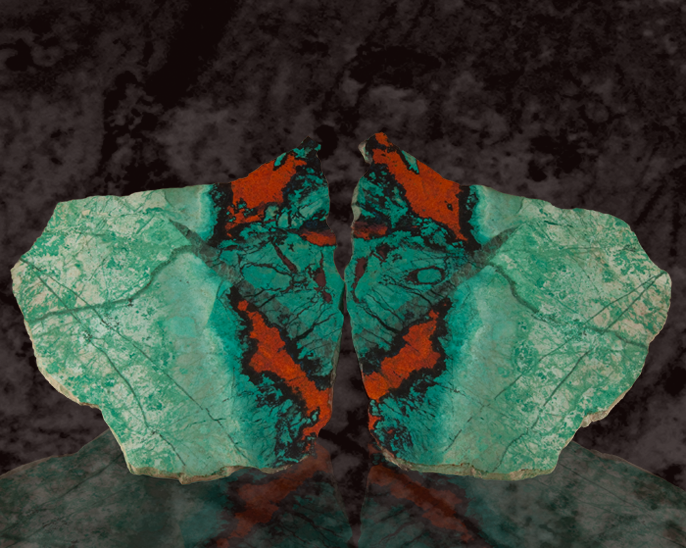 This attractive mineral gets its name from the Greek – "dia," meaning "through," and "optazein," meaning "to see," alluding to its two cleavage directions which are visible inside unbroken crystals. It gets its emerald green to bluish-green color from its copper content and forms where copper veins have been altered by oxidation. Dioptase is an uncommon mineral found mostly in desert regions. This specimen was purchased by the Society in 1967. Photo: Arnim Huber. 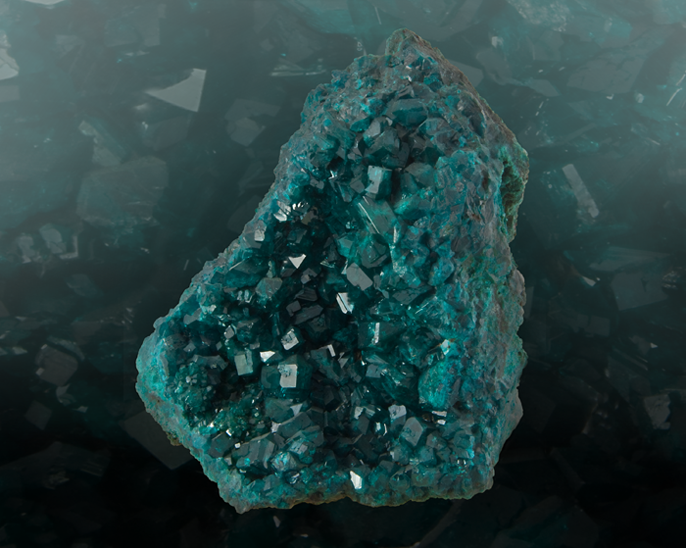 Coprolites are the fossilized remains of animal droppings. The name derives from the Greek "kopros," meaning "dung," and "lithos," meaning "stone." Most specimens of dinosaur coprolites found in the Morrison Formation are from large herbivorous dinosaurs. Typically, the petrified remains indicate a well-digested meal with consistent texture. Coprolites are classified as "trace fossils," contrasting the term "body fossils," because they provide evidence of the animal's behavior (in this case, diet) rather than its appearance. This specimen was donated to the Society by Tom Helfrich. Photo: Arnim Huber. 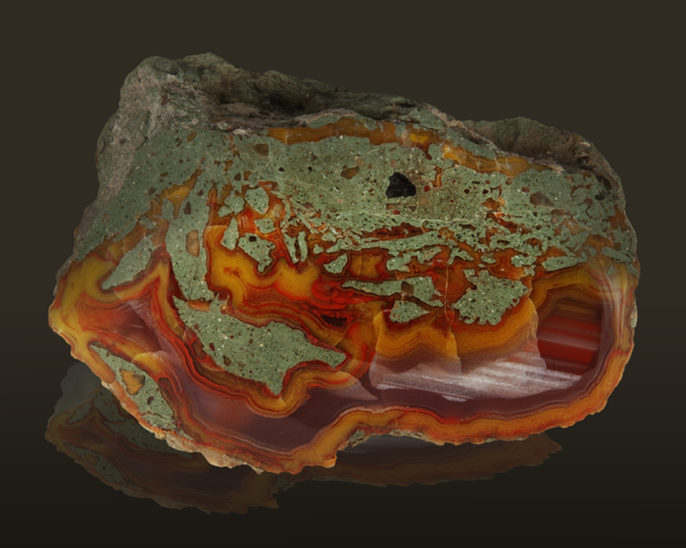 Named in 1795 to honor the Swedish chemist and mineralogist Torbern Bergman (1735–1784), torbernite is exclusively green, forms tabular crystals and also occurs in layered lamellar crystal masses. Although it is a uranium-bearing mineral, it is only weakly radioactive. It must be handled with care because of its fragility. This specimen was purchased by the Society in 1973. Photo: Arnim Huber. 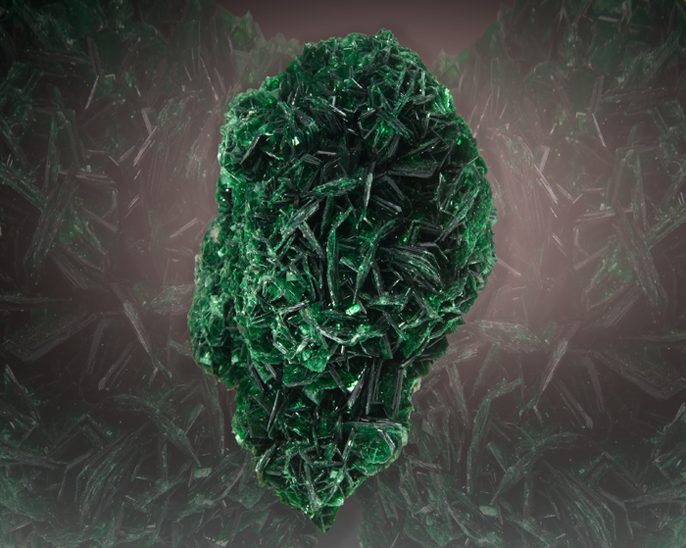 The colors of Condor Agates tend to be dark colored with orange, brown and yellow being typical, but the full spectrum of colors and variable color combinations are known. After tracking down the path of the German collector who first found Condor Agates, purportedly, in the 1990s, miners named these colorful agates after the large birds flying above the collecting site at 6,000 ft. elevation in the Andes Mountains; however, this story may be folklore. A source in Mendoza Province, near San Rafael, Argentina, has been confirmed recently. This specimen was cut and polished by Ed Reiber and donated to the Society. Photo: Arnim Huber. 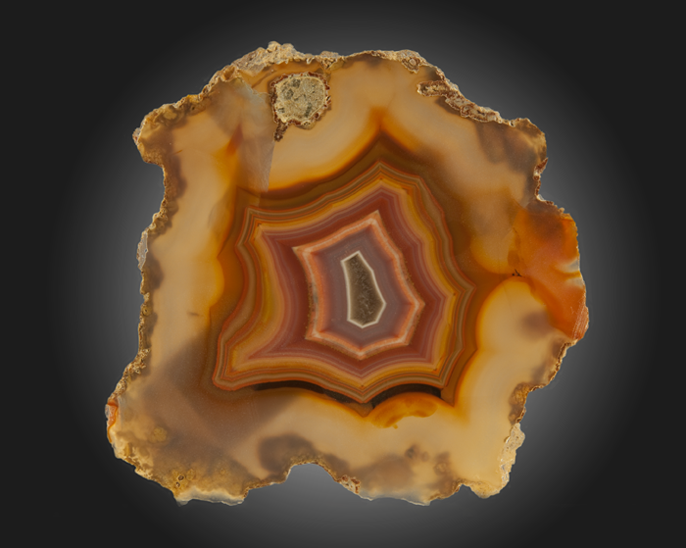 The term "Agatized Dinosaur Bone" is attributed to fossilized dinosaur bones petrified with silica or quartz crystals which impart a colorful, glassy appearance. This process is termed "chalcedony pseudomorphs after bone" and preserves the cell structure of the dinosaur and leaves the bone structure intact. The most prolific layers of dino bone come from the Morrison Formation, identifying the remains as late Jurassic, dating between 136 and 145 million years ago. This means that the agatized bone was formed over 100 million years after the dinosaur died and was buried. This specimen was donated to the Society by Tom Helfrich. Photo: Arnim Huber. 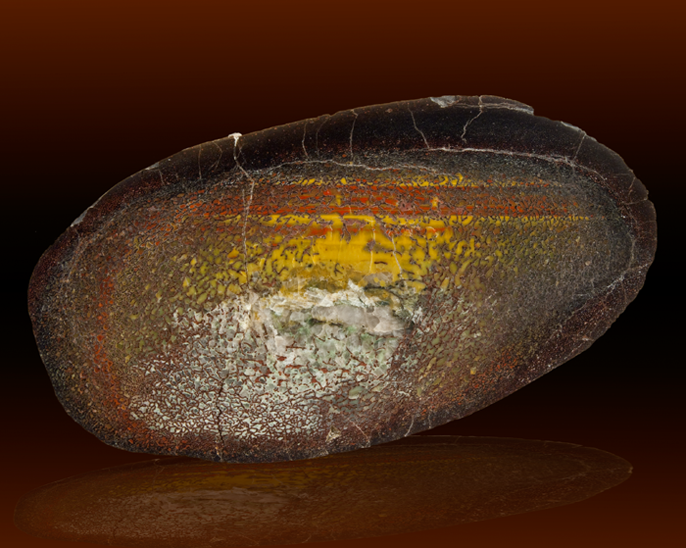 This gem mineral typically crystallizes in granitic pegmatites or in vapor cavities in rhyolite lava flows. Pure topaz is colorless and transparent but is usually tinted by impurities. Typical topaz colors are wine or "sherry," yellow, pale gray, reddish-orange or blue brown. Naturally occurring blue topaz is quite rare; although, treated blue material is prevalent in the gem trade. Some clear topaz crystals from Brazilian pegmatites can attain boulder sizes and weigh hundreds of pounds. Photo: Arnim Huber. 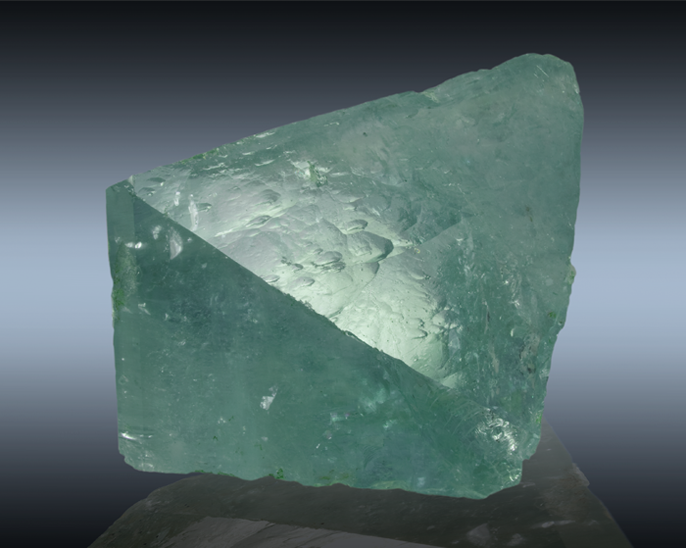 The term "jasper" means "spotted or speckled stone" and is derived from the Greek "iaspis." Jasper is an opaque variety of dense, cryptocrystalline quartz. It usually contains organic materials and/or mineral oxides such as iron oxide, which produce interesting colors and patterns. Those patterns arise during the consolidation process, forming flow and depositional patterns in the original silica-rich sediment or volcanic ash. Picture jaspers exhibit combinations of patterns, such as dendritic structures, or color variations that evoke scenes or images on a cut section. Photo: Arnim Huber. 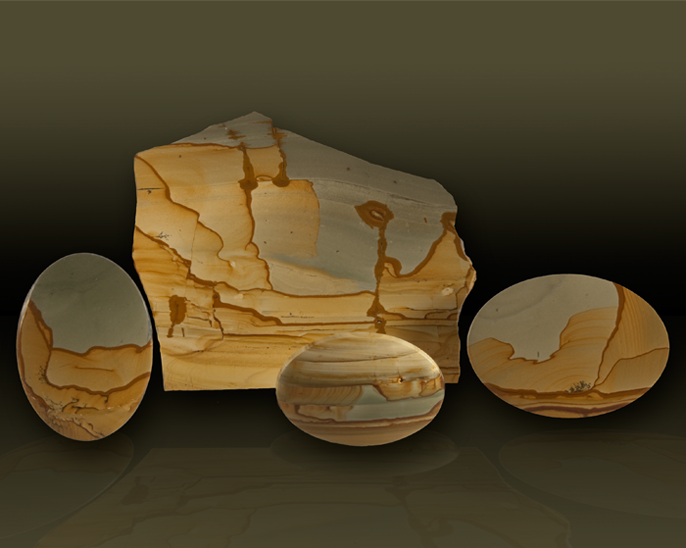